This is one of the closest sets of hiking trails to the Princeton campus. It is a 1.3 mile walk from McCarter Theater, basically just on the far side of the Graduate College and the Golf Course. There is a link to a PDF Map on this page or click here. 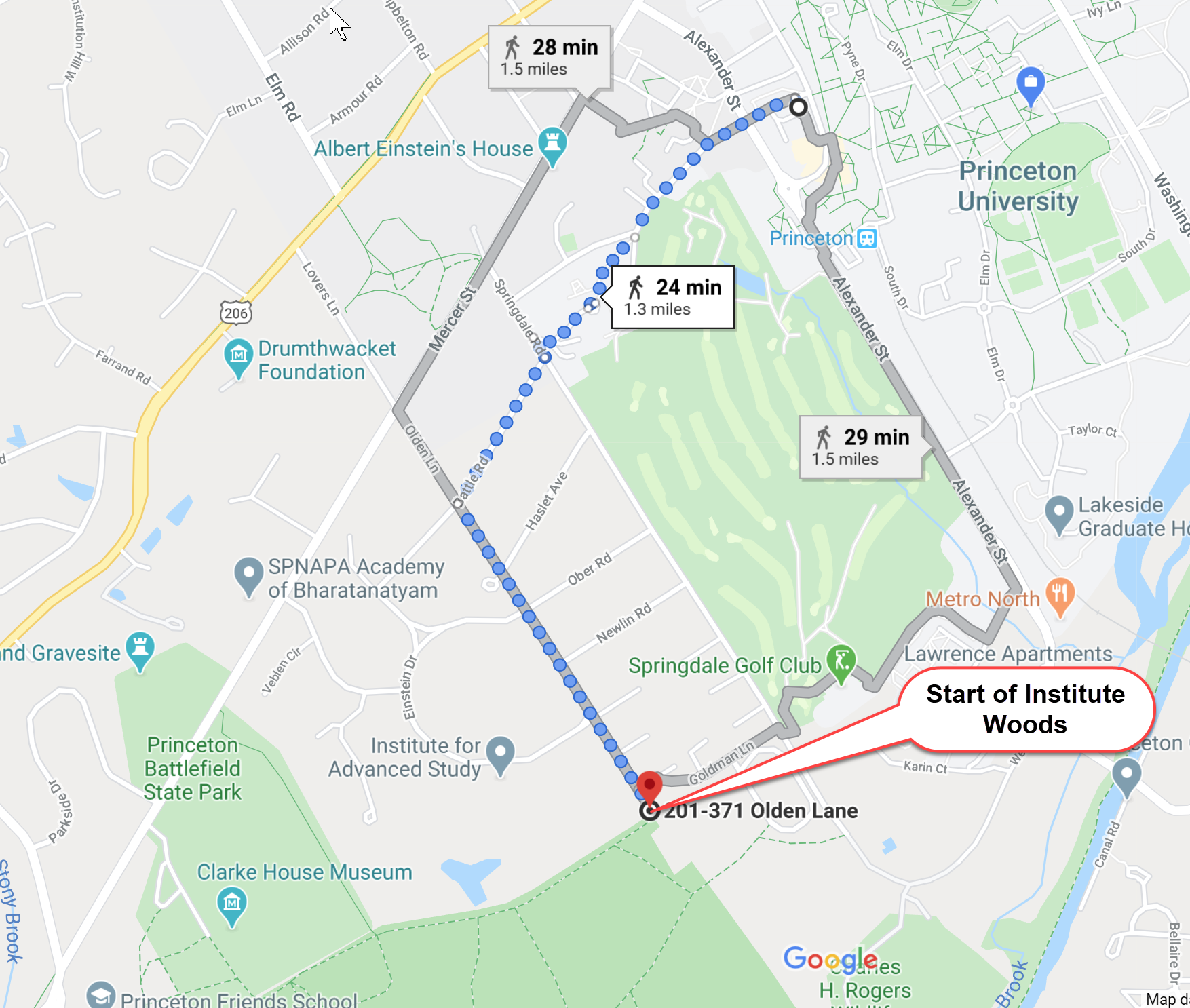 These tracts are located between Alexander Road and Quaker Road and can be entered on foot at the end of Olden Lane. Visitors preferring to enter the area through the Refuge can use West Drive, which enters Alexander Road just north of the Stony Brook bridge.

Walking and biking are permitted in the Institute. You can do a short walk or up to 13 miles of walking. Most of the trails are fairly wide which means that it is easy to keep at least six feet from others while walking to maintain social distancing. If you do come upon others, it is usually easy to step off the trail into the woods and let them pass.

You can think of the trails as being laid out in a grid or box pattern, roughly north-south (blue lines) and east-west (green lines). The old Trolley Tracks Trail is at the northernmost part of the Woods and is gravel for most of its length. This trail runs ~east-west (green) and is generally the highest elevation. All the trails that lead off of it run ~north-south (blue) and slowly drop down hill to the Stony Brook flood plain. So it is actually pretty easy to get around the trails without getting lost by just remember the grid layout. If you are heading downhill, you are on one of the north-south trails and will end up at the brook. If you head back uphill, you'll get to the gravel track. If you are staying fairly level, you are on one of the east-west trails, and sooner or later you will hit a north-south trail to take you uphill or downhill. 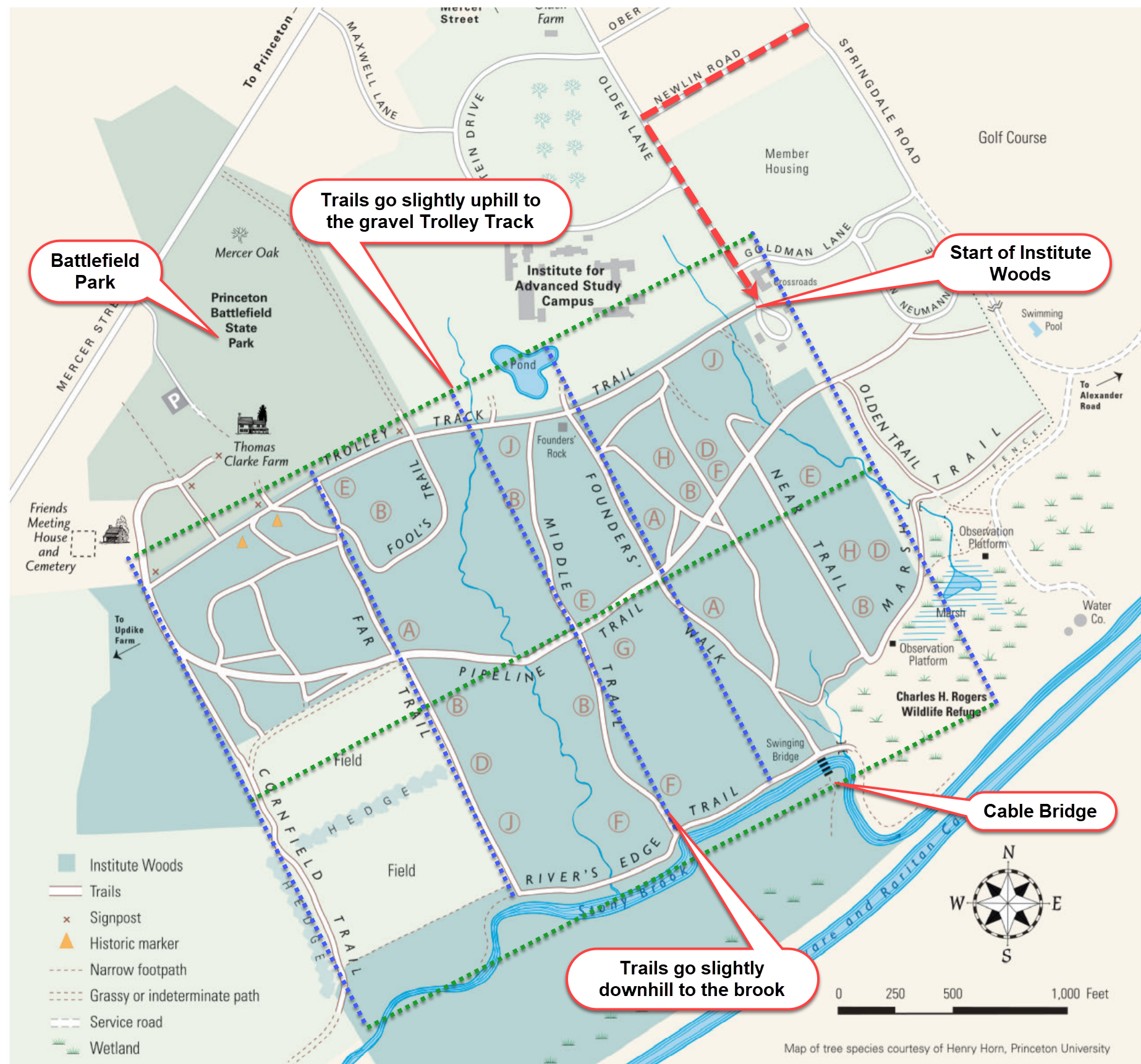 The Institute for Advanced Study Woods and Charles H. Rogers Wildlife Refuge form a 300-acre tract of deciduous forest bounded on the east side by the wet woodlands and marsh of the Refuge. Though crisscrossed by a network of trails and a sewer right-of-way, the Woods include a small area of virgin forest and harbor an unusual number of bird species, particularly during the songbird migration seasons. For this reason, the Woods are described in many birding guides and hiking books, and birders from all over the country come to visit. The Woods are particularly popular in early May, and the area is also covered extensively during the annual Christmas bird count. An observation platform built by Boy Scout Troop 40 overlooks the main section of the marsh.

The Woods were purchased parcel by parcel by the Institute for Advanced Study between 1936 and 1945, Louis Bamberger and Carrie B.F. Fuld initiating the project with a gift to enable the first purchase. The Woods are now open to the public and managed under the N.J. Green Acres program. Use of the contiguous land as a wildlife refuge was accomplished by the Princeton Open Space Commission through a conservation easement from the Elizabethtown Water Company.

The original Princeton settlement on the Stony Brook was just to the west of the Woods, and the Quaker Meeting House on the corner of Mercer Road and Quaker Road is still used. Most of the land was farmed or planted as orchard at one time, and a working farm abuts the western end of the Woods today. An old trolley line between Trenton and Princeton marks the northern edge of the Woods behind the Institute fields.

The Woods are located in the upper plains area between New Jersey's upland rocky ridges and the sandy coastal plain. Here the soil is a mixture of eroded shale, clay, and sand. The mixture is rich with phosphates and has good drainage properties for the most part, so luxuriant growth is encouraged.

The Stony Brook flows from west to east through the Wood, bordered by a broad flood plain. This area usually floods for a day or two twice a year. You can look for debris tangled in the bushes to gauge the level of the last flood.

Because so many marshes in the region have been drained and filled for development, the Refuge marsh is practically unique. A pump draws water from the Stony Brook into the upper marsh, and water drains from this marsh under the road through conduits to the lower marsh. This helps sustain the water table in both marshes, and any overflow reenters the Stony Brook through natural drainage.

An unusual number-at least 45-of tree species is found in the Woods, in part because the area was at one time a patchwork of farming fields and orchards. These were abandoned at different times, and each occasion fostered a particular type of growth as forests replaced open fields. Look for distinct stands of trees that dominate the upper canopy of woods in the areas once used for open farm land. You will see aspen and gray birch in areas that were farmed as recently as 1940, and a beech stand that shows little evidence of human disruption and includes trees dating from the 1720's. This area may well be virgin forest. Throughout the Woods you will also spot lines of large trees with spreading branches; these are trees that grew up in fencerows when the fields around them were open.

Some of the variation in tree type is due to natural circumstances such as soil conditions, wind storms, and trees falling because of old age or disease. Oaks and hickories and an understory of dogwoods are found in well-drained upland areas. Sweet gum, red maple, and beech have done well in poorly drained soils. Young trees among older stands of different species are growing where trees have fallen and created a gap in the leafy canopy that light can penetrate to nourish new growth.

Most imposing of all the trees is a stand of tulip trees, among the tallest species in our Eastern forests. Their thick, straight trunks are easy to identify. Dogwoods are the most numerous tree species in the understory throughout the Woods.

Spring wildflowers are abundant in this tract. Along the Stony Brook flood plain you will see beds of yellow trout lilies, light pink spring beauties, and purple violets. Mayapples carpet the uplands at this time, while wild yellow iris can be found in the wet areas of the Refuge.

As noted, birds are by far the major wildlife attraction here. Normally, the Woods are home to some 42 species. During the migratory season, that number jumps to 200, with the warbler migration arguably equal to any place of comparable size in the U.S. Bird watchers flock to the Woods in May particularly to catch sight of the many warblers that pass through. This is a good place to spot a Kentucky warbler, and another prized sighting is the prothonotary, or golden swamp warbler. Among the transitory birds, quite a few species stay to breed in the Woods over the summer. The most common nesting species are bluejays, rufous-sided towhees, and wood thrushes who forage on the floor of the Woods. Yellow-throated vireos can be spotted near the water. The brightest birds you may spot in the spring are the Northern orioles, rose-breasted grosbeaks, and scarlet tanagers. Tanagers are welcome both for their bright red plumage and their voracious appetites for gypsy moths.

In the early 1990's, deliberations on the future of the Woods and open farmland are continuing. At this writing state Green Acres loans have been secured, and Princeton Township has pledged to aid a coalition of private conservation groups in purchasing the development rights to the land to insure its preservation as open space and a historic district accessible to the public.