Mountain Lakes is 1 mile north of campus, and offers several miles of easy hiking trails. Mountain Lakes is an old estate, which explains the long, paved driveway leading to the old house at the center of the property on the edge of lake. Other features of the park include rocky streams, massive boulders, and elevated boardwalks.

Walking from campus via Google:

From the corner of Nassau Street & University Place (the Rocky Dining Hall), turn left onto Nassau heading away from campus. At the next traffic light, turn right on Bayard Lane (rte. 206) and follow the road down the hill. At the gas station, cross Bayard Lane to be on the far side of the road— in the next block, the road will curve to the right, but continue straight on the sidewalk through some bushes. The sidewalk will turn into a road, and at the end of the block will be the entrance to Mountain Lakes. 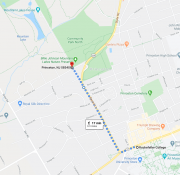 Trails are well maintained and have color-coded markings along the trails that correspond with the maps.

For an introductory hike, take the driveway into the house and then walk down the house's front lawn to the lake. At the edge of the lake, you'll find the green trail that loops around the lake; there are few green blazes on the trail, but as long as you stick to obvious trails that are on the lake perimeter, you'll be on the right track.

For a long loop through the park, start at the parking lot on Mountain Ave and head counter-clockwise.  From the eastern edge of the parkinglot, take the paved path briefly until a wooden plank marks the start of a trail into the woods. After crossing a stream, the white trail briefly hugs a pond before veering left to cross another stream. The white trail will then go through trees and a large field. Just before getting ot the paved road & house, turn right onto the red trail. Follow red until it joins with yellow (go straight/left on yellow). Yellow will lead through a boulder field before crossing white. For a short bonus loop, take the white trail to the right, up and over a stream, before rejoining yellow. Yellow will continue to near the edge of the park; after crossing a large stream, take a hard left to start the red trail. In a bit, red will briefly touch the green trail, giving the option to finish the loop via the lake perimeter. Otherwise, follow red to the boardwalk before turning back in towards the lake (via blue). From the end of the lake (reached either via green or red), take the red trail parallel to the driveway back out to the parking lot.

The Mountain Lakes Open Space Area, a “central park” in Princeton, consists of some 400 acres just north of the center of town, most of it open to the public. It has a wide variety of hiking trails- and two biking trails – some connecting to other trails outside of the area described here. Along with views of Tusculum, the estate built by John Witherspoon, and historic Coventry Farm, it features a great variety of open fields, several small streams and lakes, old stone walls, boulder fields, and old growth pine and hardwood forests. The area is divided into five sections: The Billy Johnson Mountain Lakes Preserve, including the Mountain Lakes House; Mountain Lakes North; John Witherspoon Woods; the Tusculum fields; and Community Park North. Most of the remainder of Tusculum, to the east, and Coventry Farm, to the west, is private open space.