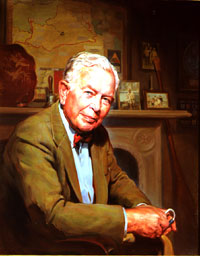 The Josh Miner ’43 Experiential Education Award was initiated by the Friends of Outdoor Action Board in 1995. The award is named in honor of Josh Miner of the Princeton Class of 1943. As a founding trustee of Outward Bound, Josh Miner was instrumental in bringing the philosophy of Kurt Hahn to the U.S. and in establishing the first U.S. Outward Bound Schools. In celebration of Josh’s significant influence on the development of experiential education in the U.S.A., the Miner Award is presented each year to a graduate of Princeton University who has provided outstanding leadership in the fields of experiential or outdoor education. To continue the tradition of experiential learning at Princeton, the award winner serves as a member of a panel on experiential education held at Princeton. A certificate is presented to the award winner.

Throughout his life Josh was a champion of outdoor education and leadership development. His role as the founding trustee of Outward Bound planted the seed from which OA developed years later. The qualities of leadership which form the Outward Bound ideal ("To serve, to strive, and not to yield") are most embodied in the OA Leader Training Program where students are challenged to develop their leadership abilities through rigorous training and through leading other students on wilderness trips.

Josh and his wife Phebe were great supporters of the Outdoor Action Program. His goal was for the funds to support student leadership development and education. A number of friends and supporters of Josh have contributed to the fund to create the Josh Miner Leadership Development and Education fund. This endowed fund provides annual support to enhance the quality of leadership education in the Outdoor Action Leadership Training Program.

For additional information or to inquire about making a gift to the fund, please contact the Outdoor Action Director, Rick Curtis at (609) 258-5621.

We are all saddened by the death of Josh Miner who gave so much to the field of outdoor education. This message about Josh was sent out by Outward Bound on February 1, 2002.

It is with a profound sense of loss that we write to inform you of the death of Joshua L. Miner III, the founder of Outward Bound USA, at the age of 81. Josh passed away peacefully yesterday at his home in Andover, MA with his wife, Phebe, and eldest son, Josh IV, by his side. A memorial service will be planned for February.

As we mourn the passing of a great friend, we must also celebrate his full and rich life as a visionary educator, noted advocate for youth, and World War II hero. In the early 1950s, Josh was inspired by the philosophy and educational approach of Kurt Hahn while teaching under him at the Gordonstoun School in Scotland. Over the next decade, and with the support of many other inspired individuals, Josh founded the Outward Bound movement in the United States, based upon the principles of experiential learning through outdoor adventure.

From the establishment of the Colorado Outward Bound School in 1961, Outward Bound has developed into a nationwide system of wilderness schools and urban centers, and has spawned the proliferation of an entire outdoor education industry. Today, there are well over 600, possibly as many as 1,000, U.S. schools, universities, agencies and other institutions that use the Outward Bound philosophy and its techniques in their programs. Josh always urged us to celebrate these 'imitators' rather than fear them as competitors. For him, the greatest satisfaction lay in seeing a student, "discover that through trying day to day he could do much better than he dared to dream." Plus Est en Vous. There is More in You. Josh's probing blue eyes always saw the "more" in each person he encountered, the "more" that we could become as individuals and as part of our community. Josh was proud of Outward Bound's evolution, not only into a successful group of wilderness schools (Colorado, Hurricane Island, Voyageur, North Carolina and Pacific Crest), but also into vital urban centers in New York City, Boston, Atlanta, Baltimore and Philadelphia. More recently, he was pleased with the establishment and success of Expeditionary Learning Outward Bound, a public school design program currently in over 115 schools across the country. From Josh's perspective, Outward Bound was coming full circle, back to its roots in the educational philosophy of Kurt Hahn.

After the war, he worked at the Hun School in Princeton, N.J., and at the Gordonstoun School in Scotland, whose headmaster, Kurt Hahn, had founded Outward Bound.

Miner joined the PA faculty in 1952 and served as a physics teacher, housemaster, and coach of football, basketball and baseball, but in 1964 he interrupted his Andover career to bring the concepts of Outward Bound to the United States. He devoted eight years to building the organization’s American operations as a founding trustee and chairman. The program now encompasses five wilderness schools nationwide and urban centers in New York and Boston, attracting nearly 40,000 students a year. In its notation of Miner’s death, Time magazine reported that 600,000 U.S. students, including former president Jimmy Carter, have taken the course.

Returning to Andover as dean of admissions from 1972–1985, Miner was the academy’s first contact with thousands of students. Many have reported that, under strict numerical criteria, they might not have gained admission, but Miner always seemed willing to “take a chance” on an applicant in whom he saw a special spark of potential. As letters poured in during his illness, family members reported, many began with the words, “You don’t know me, but you changed my life.”

At PA, Miner also devised the ninth grade physical education course, including a ropes program and drown-proofing techniques still taught to all new students. Andover’s Search and Rescue program got its impetus from Miner’s work with Outward Bound, and he inaugurated the student service organization now known as Blue Key and helped shape PA’s student exchange with the Harbin Institute of Technology in China. He also started a program that funds trips to Andover for minority students who have been accepted to the academy and created a network of alumni recruiters.

Miner was the co-author of Outward Bound USA, published in 1981, and throughout his career he continued to scout sites and help design Outward Bound expeditions, undertaking physical challenges like mountain climbing and canoeing. He rafted the Green River in Utah every summer until a decade ago. In 1994, the organization designated its headquarters in Garrison, N.Y., as the Joshua L. Miner National Outward Bound Center.

Miner’s awards and public service commitments are too numerous to list. A director of the Andover Youth Center and a consultant on urban affairs to the Peace Corps and the Ford Foundation, he also served on a state committee for the U.S. Commission on Civil Rights and on the 1970 White House Conference on Youth. He was a trustee of Boston’s Judge Baker Guidance Center, which focuses on juvenile delin-
quency research and treatment. Although interested in gardening, fly fishing, playing piano, painting, clock repair and beekeeping, he never ceased networking with folks he recognized as “kid people.” Right up to his final illness, he seized opportunities to meet with directors of innovative programs for kids—particularly kids whose needs were not met in the mainstream educational systems.

Welcome to the OA Web Site

The OA Web Site allows us to offer rich dynamic content and provide you access to the latest that is happening with OA, from programming on campus to alumni trips and activities. As we continue to add new features to the site, it will also allow us to better serve our alumni. Thanks for checking it out!

Forty years is an incredible milestone for a college outdoor education program. OA was one of the very first colleges in the US to offer an outdoor orientation program to incoming freshmen. In the forty years since OA began it has become the single largest outdoor orientation program in the country. No other school takes out as many freshmen at one time as OA. That's a testament to the value of the experience and the dedication of an incredible group of OA Leaders. As well as the largest program, we also have the largest group of trained leaders and any school in the country. That's because OA's Leader Training Program is open to any student who wants to participate.

To find out more about OA's accomplishments over the last forty years, read the 40th Anniversary Report on the Status of Outdoor Action.

Send us your News Updates

Do you have news to share with your OA alumni friends? We want to hear from you. To post your news to OA use the login information that was mailed out in the latest Tiger Trails Newsletter and login.

Then go to Notes from the Trailhead