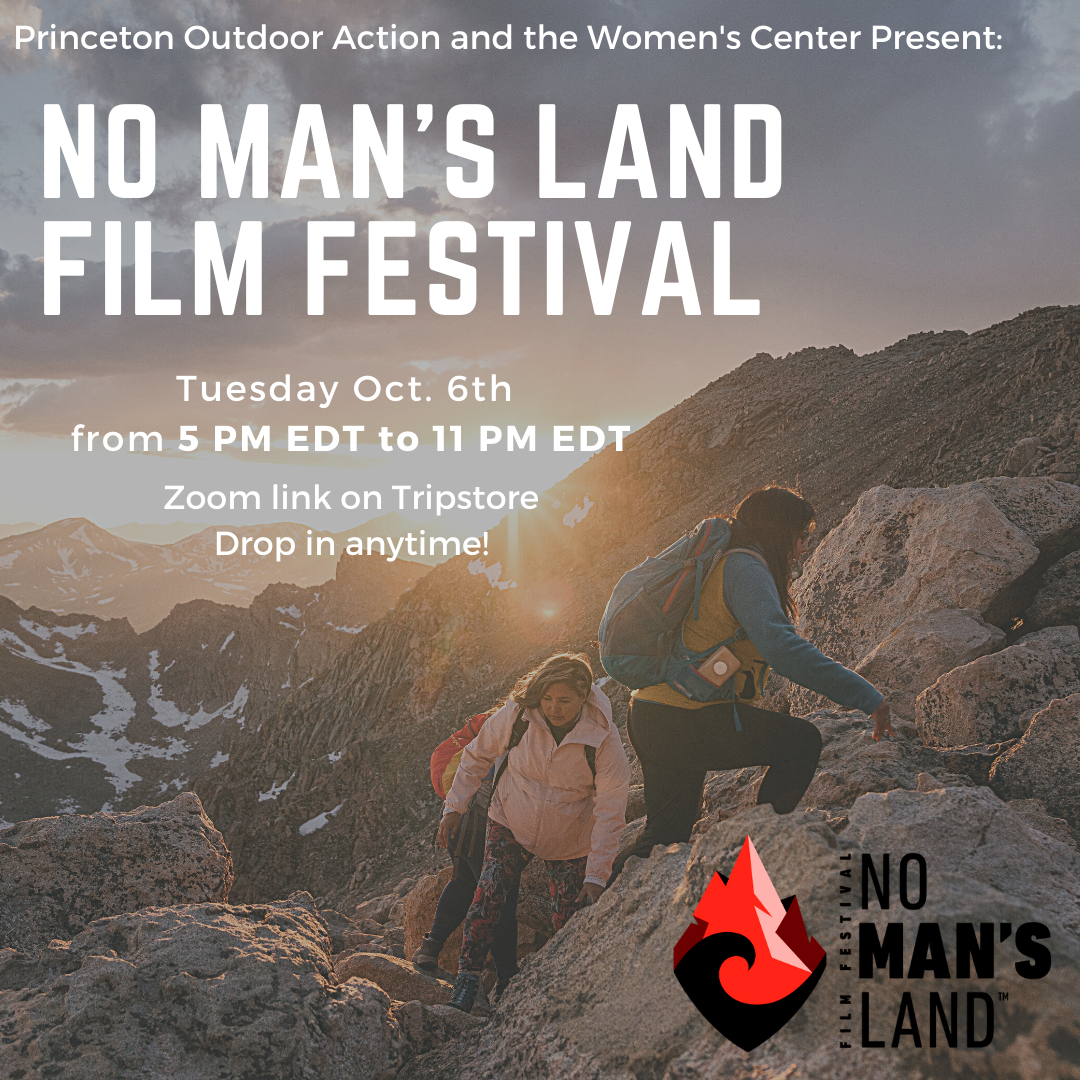 Join Outdoor Action and the Women's Center for an evening of the best women's outdoor adventure films from the No Man's Land Film Festival. There are 7 short films and the whole show runs 90 minutes. Watch anytime between 5:00 PM and 11:00 PM EDT. The festival is free for all Princeton students, faculty and staff. You'll need to login at the Vimeo site below with the provided password. This is a PU only event, so do not share the link or password.

Films with the * next to the title indicate female involvement in the production. It also indicates that they are in the
running for the “Fem-Wow” award; ie. all-female production.

The Adventure Itinerary * (4:14)
Director: Caroline Côté
Producer: Les Films Denali
Female Director
Katherine is dedicating her life to harnessing adventure as a means of protecting and conserving the marine environment, to inspiring everyone to step beyond their doorstep through adventure to fall in love with the beauty and wonder of nature and through this love, to be inspired to take action to protect our wonderful planet.

Winter’s Edge * (10:16)
Director: Sean O’Connor
Producer: Jim Aikman, Graham Zimmerman and Katie O’Connor
Female Producer
Laura’s snow safety work protected both resort skiers and backcountry skiers from avalanches. At Mt. Hood Meadows, Laura’s job at ski patrol included skiing into avalanche-prone terrain before the skiing public arrives and detonating explosives that trigger avalanches. By pre-triggering avalanches, it prevents them from being able to roll down on skiers during business hours at the resort. It keeps in-bounds skiers safe. She was also a professional “observer” for Northwest Avalanche Center, collecting field data that would be translated into backcountry forecasts. Both jobs are the kind you don’t want to mess up. Laura shouldered the weight of that responsibility to keep the public safe and enjoyed her duties.

This Land * (10:03)
Directors: Whitney Hassett and Chelsea Jolly
Producer: Faith E. Briggs and Addie Thompson
Female Directors and Producers
Fem-Wow (All-Woman Production) | No Man’s Land Film Festival 2020
Runner and advocate Faith E. Briggs used to run through the streets of Brooklyn every morning. Now she’s running 150 miles through three of our National Monuments that lay in the thick of the controversy around public lands. She will be accompanied by running companions - who represent diverse perspectives in what it means to be a public land owner. Conservationists are no longer reading Walden and hanging on the words of John Muir. Women, people of color, indigenous peoples and their knowledges and perspectives have been ignored in the conservation conversation. That is changing. The face of conservation is changing. The voices involved are changing. Those voices are speaking a new language and this is a new story. A story about land access told through a journey of empowerment. It is also a story about love - love for community, love for our country, and love for the spaces that have miraculously transformed the lives of these runners. This short film is meant to act as both a powerful encouragement for those in the fight to find their place in the conservation effort and a tool to start these much-needed connections and conversations around public lands
across our country.

Life of Pie (11:25)
Directors: Ben Knight and Travis Rummel
People’s Choice | No Man’s Land Film Festival 2020
It wasn’t long ago that the small Colorado town of Fruita was solely a hub of agriculture and oil and gas development. But singletrack shredders and pizza chefs Jen Zeuner and her partner Anne Keller have helped to transform the high-desert town into a mountain biking hotspot with their Hot Tomato Café. It wasn’t always easy — some residents of conservative Fruita weren’t quite ready for their “lifestyle” at first. But the women’s delicious East Coast-style pizza — and the love they put into making it — have made them indispensable members of the community and turned the Hot Tomato into the living room of the Grand Valley’s outdoor recreation industry.

The End of Snow * (20:35)
Director: Morgan Heim
Producer: Jane Zelikova
Female Director and Producer
Dr. Jane Zelikova is a tropical ecologist living in the mountains of Wyoming and Colorado. She dreams of snow in the summer and tropical forests in the dead of winter. But her snow-capped Fourteeners are changing – no longer bringing the deep winter snowpack once promised. This is a future from which she and the people of the West can’t run. What’s a wildly curious, adventurous girl to do? Embark on a journey into the mountains to find the tales of the past, present and future of snow. There will be adventure. Friendships will form. She will dig holes, and fall down those holes. But like any good story, the characters she meets will help show her the way, a map for living in a world beyond the end of snow.

Time to Reconnect (1:23)
Director: Joe Kayser
Producer: Daniel Tuggle
“Native people and indigenous people will always have a connection to the land. It’s a part of who we are. This land is our land.”

Being outdoors means something deeper for everyone. That’s especially true for Jaylyn Gough. She founded the organization Native Women’s Wilderness, which aims not only to get more women and girls outside, but to acknowledge their ancestors who first walked those same lands. The history of the Navajo is one of unimaginable loss and heartbreak, but for Jaylyn, the first step in healing is to revisit and connect with the land that connects us all. It’s time to reimagine what can be. It’s time to reconnect. It’s Time to Fly™. Presented by HOKA ONE.

Dear Mother Nature (29:56)
Directors: Tim Kressin and Wyn Wiley
Producer: Davis Goslin
Wyn Wiley (he/him), aka Pattie Gonia (she/her), has made waves over the past year as an environmental advocate drag queen. We follow Wyn as he travels to Hawaii to see first-hand the impacts of careless consumption and plastics on Mother Nature (or as Pattie says, "Mother Natch"). Wyn meets with scientists, non-profit leaders, volunteers, then rallies the Pattie community to lead a beach clean-up. Ultimately, Wyn partners with sustainable fashion designer, Angela Luna, to create three dresses that personify the plastics crisis